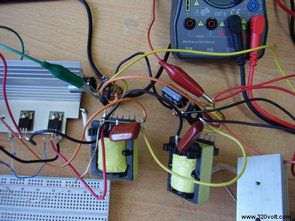 This is a bit confusing to distribute sort myself :) small but great works to come to a new SMPS circuit with ir2153 did.

If you remember aha SMPS with ir2153 work I had before, “IR2153 and ATX SMPS Transformer with Symmetrical Output Voltage”

System did not benefit from the same PC power supply transformer, but this time I used a single drive circuit 2 circuit set up rough drafts I’ve tested the circuit was very simple output, input filter quite well although insufficient results

CAUTION Be careful is working with high voltage capacitor circuit connections Beware + – If you connect the high voltage polarity may be large explosions before running the insured Power Line circuit, protective goggles

In fact, the SMPS output voltage TDA7294 much for normal + -40 volts is recommended but the highest working voltage + -50 volts unless otherwise stated in my hand other appropriate load is not compelled to test 2 TDA7294 circuit was made by the circuit for a long time before I made the SMPS circuit starting with the opportunity to receive ‘ve been

SMPS 220v mains input EMI filter used in my hand was not material because the exit situation worse filter capacitor to 470uF 63v I used the coil low value was still performing pretty good attentive meticulous design been done , what will happen.

Much better quality in the future , but I think a design application takes a long time so I wanted to share the first circuit may be people who want to try .

The first application transformer rewinders ready because we use the output voltage at a certain limit switch did not also be taken power was limited in this circuit transformer I added transformers atx power supply disconnected from the 12v outputs diode bridge connected outputs serial connection was made whereby both higher voltage and power have achieved .

SMPS transformer in the normal metal transformer as in the 2x event there is normally pc power supplies 12v output transformer second winding and two diodes with DC conversion is done frame winding in common is drawn from the common point using direct two 12v end KUPRIAN diode when it is fastened higher voltages can be obtained. See ” 13 – 15Volt 10Amp 30volt outputs modified for the SMPS ”

On the market, p3, p4 ATX PC power supply contained in the transformer you can use , but in the power supply circuit is used TL494 careful . When you examine the details of the scheme easier to understand.

As I said, this is the first circuit for testing purposes only as well as material due to lack of some parts is not enough, for example ir2153 supply the rectified mains voltage transistor control circuit credited with but it is more practical because the transformer and 7815 I used normally not be necessary.

I would like to say that such a simple system performance was really good, I tested with TDA7294 power of the speaker is low, around 50% open, the sound could have tested for a long time.

Yet at the design stage of the circuit