Multifunctional sinusoidal three-phase signal generators are available on the market for testing inverters. However, in a situation where a simple control is necessary, to which a single frequency signal suffices, such a device becomes an unnecessary expense.nMoving the phase... Electronics Projects, ATTiny25 Three-phase 50 Hz Generator Circuit "avr project, microcontroller projects, " Date 2019/08/04

Multifunctional sinusoidal three-phase signal generators are available on the market for testing inverters. However, in a situation where a simple control is necessary, to which a single frequency signal suffices, such a device becomes an unnecessary expense.nMoving the phase of an already generated analog signal would be difficult to perform, therefore it was decided to produce three sinusoids simultaneously. The low frequency of the output signal – only 50 Hz – allowed the PWM generator to be used with a reconstruction filter.

In this device the PWM transducer was implemented programmatically because three outputs were necessary. The frequency of the PWM signal is 12800 Hz and this is the maximum that was achieved by clocking ATtiny25 with a 16 MHz quartz resonator. The choice fell on this ATTiny25 microcontroller, because it can work with a quartz resonator in contrast to, for example, ATtiny13. In turn, the frequency of the clock signal translates into an output signal, thanks to which the built-in RC generator is not suitable for this application.

As an output buffer, an LM324 quad operational amplifier was used. Due to the asymmetrical power supply, the output signal must contain a constant component. The choice fell on this layout because of its availability and low price. You can try to exchange it for another type, which has a wider range of tolerated voltages. Mounting it in the stand allows quick replacement in case of damage caused by, for example, short circuit. The reconstruction filter is a very important element of the generator, DDS, because it allows to clear the spectrum of the output signal from the component derived from the clock and its harmonics. This arrangement allows the use of an uncomplicated filter due to the significant difference between the useful and the clock signal, respectively: 50 Hz and 12800 Hz.

A 2-stage, low-pass RC filter was used. The values ​​of the elements were selected so that the influence of the buffer input resistance and the ATtiny25 output resistance would be negligible.

The oscillogram of two output waveforms is shown in Figure 3. They are, as intended, shifted in phase. At the bottom of the sine wave you can see the barely noticeable flattening caused by LM324 restriction. 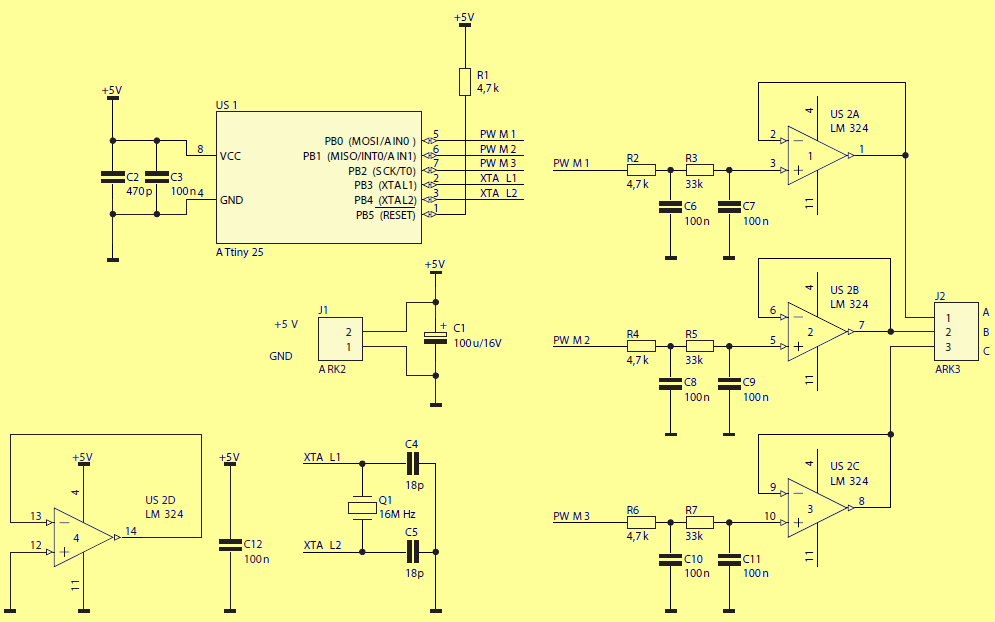 If such a distortion turned out to be unacceptable, you can, as mentioned earlier, try to replace this system with another one, eg MCP604.

Visual assessment of the time course is not everything. The amplitude spectrum of a single signal is presented in Figure 4. Its SFDR can be estimated at approx. 30 dB.

The microcontroller should be programmed and the source of the clock signal should be changed to an external 16 MHz quartz resonator (CKSEL 3 … 0 = 1111) and the CKDIV8 bit should be switched off. The device does not require calibration and is immediately ready to work. Powered by 5 V, it consumes approx. 15 mA.