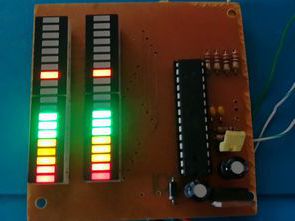 The vu meter circuit, which can operate peak hold and normally, has a 2×20 LED peak indicator. Leds are controlled by Atmega8 microcontroller. The display range is -34 to +4 dB.

The LEDs are controlled by multiplexing 4 LEDs in 10 steps, the multiplex frequency is about 100Hz. R1 … R4, their resistor (270-ohm) limits the LED current, determines the brightness of the LEDs. The left and right channel signals are connected to the inputs of the analog-to-digital converter ADC0 and ADC1. The descent time of the peak led is about 600ms.

PCB Printed circuit design was prepared with Sprint layout 6 PCB dimensions are 67x65mm. There are single and double deck versions of the PCB drawing. Single-layer PCB has been tested, I don’t think there will be a problem with double-layer, no big change, the jumps have been moved to the upper layer.

Instead of 20 led bar graphs in our market, you can use two 10 led bar graphs. I used RGB Led graph and red Led graph, but the blue led direction in the RGB bar messed up the job, normally it goes as blue, green, yellow, red. If you add a complete red led bar graph to the continuation, the image would be compatible, but the starting led of the RGB led bar turns red according to the circuit.

Anyway, the solution is to use double-layer PCB, you can mount the led bar graphs from the bottom of the printed circuit. It can be a single layer, but fine workmanship is required, I soldered one row for testing purposes, the second one would be very difficult, I gave up 🙂 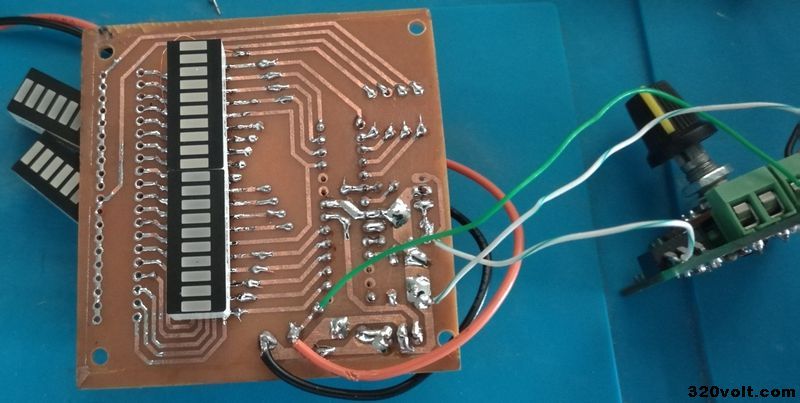 You can use mp3 player, phone, computer etc as audio source. It can be used or you can use it with a microphone preamp. In the test video, I used the circuit in the “Strip Led Microphone Vu Meter Circuit” article.

Join thousands of readers, be notified of the latest publications by Email.